Find Out Why We Follow These 8 Traditions In Our Hindu Religion! 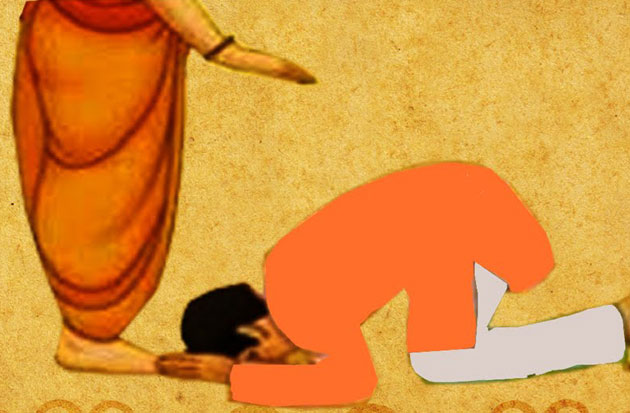 A Hindu person is devoted to perform some rituals every-day.

Here are total 8 of them and the reasons behind why it is celebrated.

This is the first thing that we Indians do in order to greet people. We join our palms which directly mean “Namaste”. Now the reason behind this tradition is that “Joining hands indirectly denotes respect”. And when we join hands together, the tips of fingers are being pressed. This pressed point denotes that we will remember the opposite person for a very long time.

This tradition is said to be followed since the ancient times.

The kum-kum is applied right in-between the two eyebrows because it indirectly retains energy in human body and it also facilitates bloody supply in muscles.

Whenever our elder ones give us money we are often said to touch their feet. Right? This is a tradition followed by many Hindu’s because it shows a mark of respect. When the younger one bows down it means that they surrender their ego in their feet.

Many believe it is a myth but the scientific reasons states that sleeping with head towards north gathers problems like blood pressure, diseases like Alzheimer too.

But not sleeping that way helps to stay safe and secured.

Fasting helps detoxify our body i.e. all the body mechanisms are entirely cleansed. It is considered to be very healthy and it also reduces the risk of diseases.

Tulsi is considered as a very scared plant in Hindu religion.

It holds a short story- Tulasi was actually the wife of Shankhachuda who believed that Lord Krishna tricked her into sinning. And then she cursed him to be a stone. Well and seeing her devotion to righteousness Lord declared that she will be worshipped as a plant.

Thus every Puja that is followed is considered incomplete if Tulsi leaf is not there.

Whenever we enter a temple; the first thing we all do is ring the bell. Right? It is done because the ringing of the bell indicates as a lucky sound. It is believed that when the bell is rang; it produces the word OM which is pure.

It also keeps the evil away from you.

Hindus have the tradition of praying to the Sun God early in the morning. Water is offered to the God while praying too. In reality, this is considered good because it helps reduce all the problems e.g. lung diseases etc.