Ways to overcome the fear of Kalasarpa Dosha 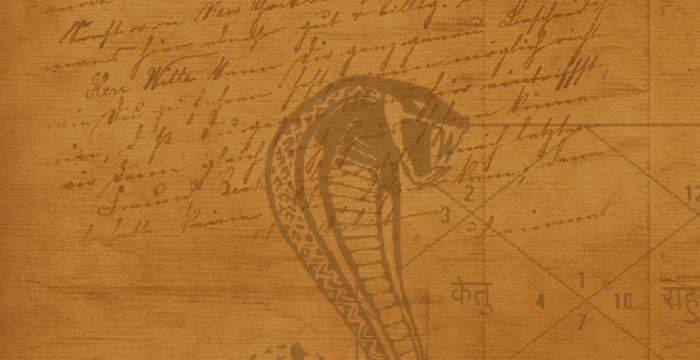 Kalasarpa Dosha (KSD) is the adverse effect of Rahu and Ketu. Vedic astrology considers Rahu and Ketu , the two nodes of moon, as planets. Both of them are known to bear heavy Karmic effects to a person. As the Vedas put it, a man’s tendency to commit sins begets harmful energy. The negative energy from his sins translates into Kalasarpa Dosha.

In modern days, Rahu and Ketu are the two fundamental elements in a person’s horoscope. When all the planets are in unison with Rahu and Ketu leaving the rest of 7 houses empty, Kalasarpa Dosha occurs.

The Mythological interpretation of KSD:

Although, scientifically two meeting points of Sun’s and Moon’s orbit are known to be Rahu and Ketu, there is mythological reference to it. As per the Indian mythology, Devas and Asuras churned out Nector from Milky Ocean which only the Devas had access to. Some of its share was ill-gotten by Asura Suvarbam failing to escape Moon and Sun’s sight. They exposed him to Lord Vishnu who instantaneously chopped his head off from the body and retrieved the Nector. Thereafter, his head was assembled to the tail of a snake and body to the head of the same. This gives birth to Rahu and Ketu, splitting one Asura into two people. However, by Lord Brahma’s grace, other seven planets were included and the concept of Navagraha came into being.

How to seek riddance from KSD:

Kalahasthi is well-thought of as a KSD remedy. During the Rahu kalam period, the priests perform this to keep KSD at bay. Besides, there are other remedies too such as Rudra Abhishekam to Lord Shiva. Worshipping Lord Shiva endows you with positive energy and negative vibrations are subsided. Then there is Naga Puja where the idol of snake is worshipped with sacred elements to eradicate all curses  Kalasarpa Dosha renders. Furthermore, there are Naga mantras to be chanted for 21 consecutive days. Find out below:

Below is the most effective way of Kalasarpa dosha. The Palas flower is dipped in go-mutra to be dried in sunlight for five days at length. Then it is grinded into a powder manually while chanting the Rahu-Ketu mantra 144000 times. Generally, three pundits are roped in for performing this discreet and well-chronicled Pooja. The person who is affected by Kalasarpa Dosha is then told to put a pinch of that powder in bath water for 72 successive Wednesdays. More often than not, this procedure yields positive results.

While Kalasarpa Dosha brings your luck to a sorry-state, you will still not have to worry as there are remedies to curtail it once and for all.

Kaalsarp Dosha in one’s Kundli is one of the most inauspicious Doshas. A person who has such a Kundli, experiences one bad event after another in his life. He becomes suicidal in nature. YourFortune will help relieve you of the bad and ill effects of Kaalsarp Dosha- Click here for puja.

If you want to check your Kundli, click here for Your Fortune Kundli service.