What Is The Importance Of Lord Krishna’s Dance Over Serpent’s Head In Indian Mythology? 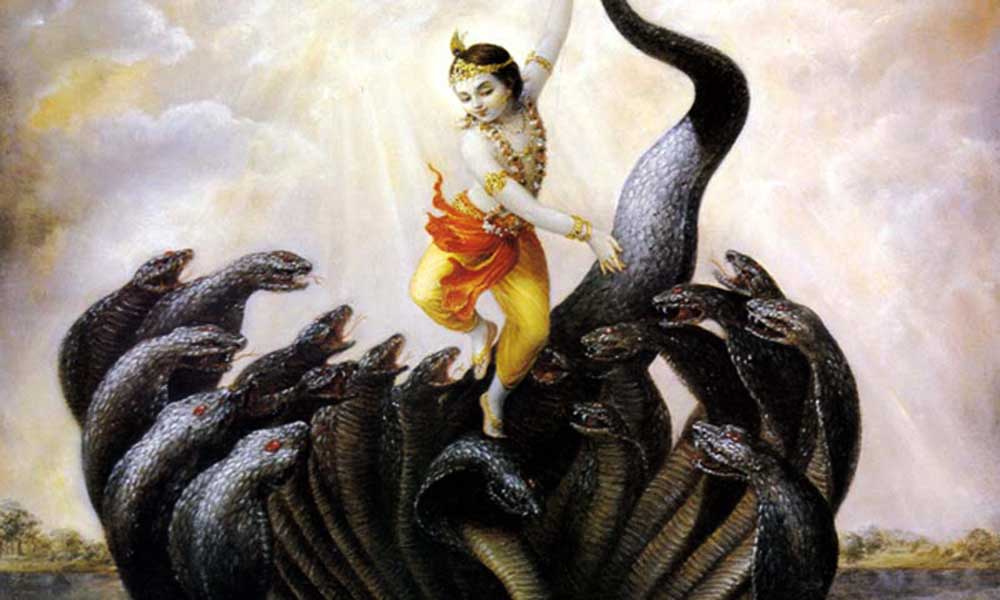 Serpent Kaliya – Krishna is the manifested emblem of far-sightedness, tolerance and benevolence.

One who comes in the Krishna consciousness denounces the materialistic tug to be one with him. While Krishna’s preoccupation is to protect his devotees from the enduring evil.

The banishment of Kaliya the serpent is metabolized as a benchmark move by Krishna to protect his followers.  One can’t escape Krishna’s sight if he nurtures spiteful intentions against his venerators. If one exercises his nefarious means to affect a Krishna devotee, it is synonymous to attacking the God himself makes sure the person is tested for his sins.

The mythological story behind banishing the serpent Kaliya:

There is a small yet beautiful lake in the river Yamuna which was named after the serpent Kaliya who tried to infest venom in the Yamuna water to carry out mass massacre while the cowboys of Braja were out pasturing the cattle. Driven by the pangs of thirst they tried to drink the water from Yamuna only to die instantaneously. Krishna , upon hearing this, rushed to spot and restored their lives. He didn’t stop just yet as it was necessary to teach Kaliya a lesson. Krishna then delved deep in the water pretending to be sporting there where he was faced with the myriad-hooded monster serpent Kaliya. It immediately went on a murderous onslaught and almost fainted Krishna prompting the cowboys to fill the air with their mourning. Krishna, unflinching as ever, showed up just then dancing on the hoods of Kaliya. Not being able to bear the pressure of Krishna’s feet, Kaliya vomited blood. This sight made his wives come out of hiding and plead before Krishna for their husband’s life with folded palms. Krishna spared Kaliya’s life on one condition that he would leave Yamuna and go back to his original home Ramanaka thereby reinstating the sweetness of the water in Yamuna and ridding it from venom.

What is the significance of banishing Kaliya?

The banishment of Kaliya hints at the fact that Krishna can never be deceived. Even if you are trying to invoke Krishna’s benevolence for your graceless interest, you are sure to invoke his wrath instead. He will expose your villainy and  withdraw his immunity instantaneously.

The story has a deep bearing in changing the perspective of Krishna devotees about him and establish himself as the all-knowing supreme entity.