On the 6th day of Navratri, We worship Goddess Katyayani 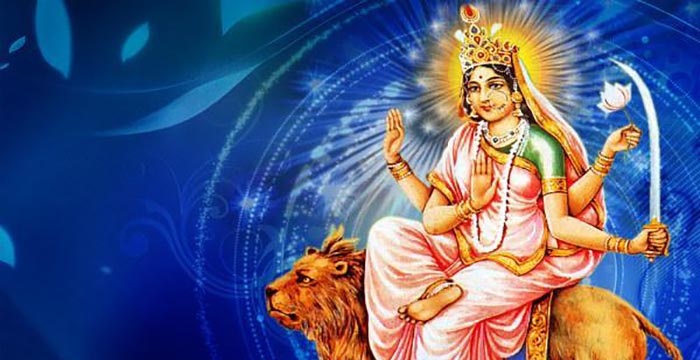 On the sixth day of Navaratri, Goddess Katyayani is to be glorified. She is the sixth image of Maa Durga. Goddess Durga took the appearance of Katyayani in order to destroy a cruel demonic presence called Mahishasura. Katyayani is referred to as the Warrior Goddess and is supposed to be the most ferocious image of the Goddess. She fought against the malevolence courageously and plucked it from its root. She is praised as Durga, Chandrika and Bhadrakali, which are a sign of her bravery and heroism. 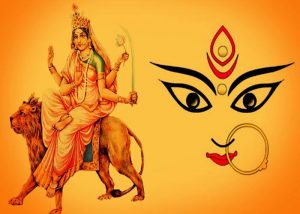 According to Hindu mythology, there once lived a noble and wise man – Katya, who wished for the privilege of Goddess Durga being born to him. He followed ascetic penance and made sacrifices for many years to impress the Gods. At the same time, Mahishasura – the evil demon, was on a rampage to destroy the earth, its creators and everything that came its way. He was growing more and more powerful as days progressed.

To stop this oppression, the three holy divinity – Shiva, Vishnu and Brahma, blessed the sage with a boon. They created Goddess Durga out of flames, and called her Katyayani (named after her father, Katya). This form of Goddess Durga was an amalgamation of the prowesses of all Goddesses/deities.

When Goddess Katyayani set out to fight demon Mahishasura, he changed into various embodiments. There was one time when he turned a buffalo. Seeing this, the Goddess instinctively leapt from her seat and pushed the holy trishul into its throat – killed it instantly, in turn defeating the demon Mahishasura. Thus, she is been called as the warrior of earth and the savior of its people.

Must Read- This is Why You’re Still Single, According To Your Zodiac Sign!

The appearance of Goddess Katyayani:

Goddess Katyayani has 4 hands. On the left side, in one hand she holds a sword, and in the other a lotus. On the right side, her second and third hands are for shielding protection and showering blessings respectively. She is also seen riding a lion.

It is believed that the Goddess Katyayani has special inclination for the well being of women and girls. She blesses them with inner strength while facing the society. Girls of marriageable age take up a fasting ritual for an entire month in order to please Goddess Katyayani. This fast is called Katyayani Vratha and is supposed to bless them with a noble companion like Lord Krishna. This period involves a daily worship of the deity and wholehearted offerings in the form of flowers, incense and sandal, incense. If there is a delay in a girls marriage or Mangal Dosha in her stars, praying to the Goddess will remove all obstacles standing in the way of her happiness. She also helps in conceiving of a child and any other problems causing marital discord. Her blessings also include better health and increase in wealth. By worshipping Goddess Katyayani, you may develop great might to fight all disease of the mind and body, sorrows and inner fears.