On the 3rd day of Navratri, this is how we worship Goddess Chandraghanta 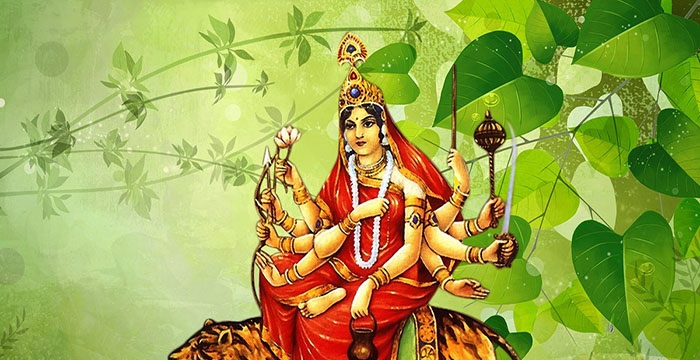 The 3rd Day of the Navratri festival is dedicated to the worship of Goddess Chandraghanta, the third image of Goddess Durga. The number 3 has a great significance in the worship of this deity, as she has 3 sets of eyes – and so apparently deemed to be all-seeing and all-knowing. Goddess Chandraghanta is also known as Chandrakhanda, Chandika or Rannchandi. All of these have relevance to the moon. Her name itself means ‘one who has a half-moon shaped like a bell’.

Goddess Chandraghanta is a warrior. She is fierce and fearless. Her worshippers believe that her innate grace, bravery and courage will be passed o to them through the medium of prayer. People who are in physical pain or mental turmoil turn to her in times of distress. Her blessings are also known to cleanse sinners and cast away demons.

The appearance of Goddess Chandraghanta

Goddess Chandraghanta’s form is very mystical and. On her head, she wears a crescent moon shaped as a bell. The bell produces a terrible sound which scares every demon, monster, ogre and giant. She adorns striking red garments and is decked in vivid jewels. She has eight hands with weapons in each one of them, which illustrate her vigilance and her readiness for war. Her weapons include a discus, conch shell, bow, arrow, sword, shield, trident and mace. She boldly rides atop a mighty lion or a tiger. 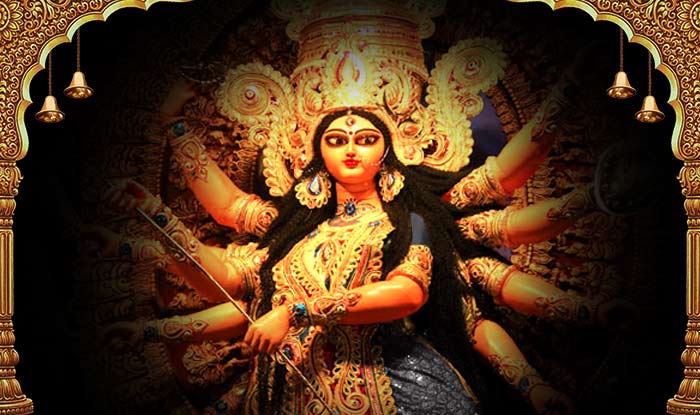 The persona of Goddess Chandraghanta:

Goddess Chandraghanta is a symbol of divine grace. Her devotees who adore and worship her on this day of Navratri can feel an aura of divine splendor. Their personas emit waves of positive energy and power, which affect the ones around them. During prayer and worship, if a devotee enjoys sweet fragrance and hears assorted sounds, he is said to be blessed by the Goddess. Success is the fruit of her blessings. Goddess Chandraghanta is also ever-prepared to destroy the wicked, but to her devotees she is a kind and compassionate Mother showering peace and prosperity. She instead destroys their enemies so that they may live in harmony and prosperity.

The rituals begin with the worship of Lord Ganesha,  Kartikeya and Goddess Saraswati,  Laxmi, Vijaya and Jaya. Thereafter is the dedicated chanting of Mantra to Goddess Chandraghanta. She is offered milk, sweets and kheer by devotees as a token of their faith. The ceremony concludes with prayers to Lord Shiva and Lord Bhramaji.

Goddess Chandraghanta is worshipped by chanting the following Mantra’s:

Translated in English the mantra means: I join hands in front of the supreme Goddess and adore the goddess with a bell shaped mark.

All Gods are said to be present in Gau Maata. If any person worships a cow, then just by worshipping Gau Maata, he gets the blessings of all the Gods. Click here to know more about Gau puja.