How reciting the Hanuman Chalisha helps you in bad times 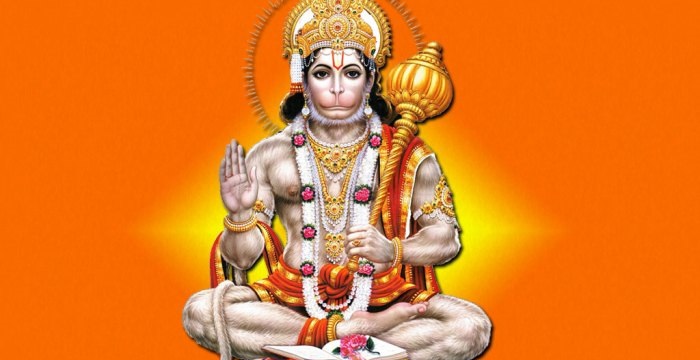 Hindu ‘Hanuman’, staunchly known as Sankat Mochan is one of the influential gods of Hindu mythology.  The name Sankat Mochan suggests that he is the dispeller of distress, he safeguards you left, right and center in troubled times. Leafing through Hindu scriptures, you will find Hanuman once ripped open his heart to show how Lord Ram resided there. This is symbolic of his devotion towards his god. In like manner, Hanuman instills devotion, courage, selfless love and grace in his worshippers.

Another common epithet of Lord Hanuman is ‘Bajrangbali’. He has this spark about himself and his body houses strength like lightening. According to the Hindu mythology, he is the son of wind which prompts him to get his job done swiftly. Hanuman doesn’t whine or fall prey, he puts up a brave frontier in difficult times. So he preaches his devotees to be mentally and spiritually strong. He portrayed as kneeling on one knee, availed at Ram’s feet to serve him.

His super-hero status as per Ramayana:

The Ramayana is inundated with stories about Hanumana as he is the second fiddle to Lord Rama. His stints with bravery earned him the ultimate superhero status. He even once carried a whole mountain called Sanjivani to save heal Lakshman. He can zoom himself into a larger person if he pleases. Furthermore, he is the inner-breath of whole Lanka Kandam as he burns Ravana’s palace to rescue Sita, Rama’s wife. Therefore, we look up to Hanuman for seeking courage so that we can rise in every occasion, face challenges with the right attitudinal disposition.

The icon of Bhakti or devotion:

The fundamental element of his power is his devotion. He found his supreme god in Lord Rama and dedicated his whole life in his service. Our minds are persistently stuck in the quick sand of materialism. The only redemption occurs when we commune with God. Who else than Hanuman can teach this simple thing simply? His whole life is an instance how bhakti unbinds itself from human laws and selfish needs. Besides, Hanuman is also considered as the reincarnation of Lord Shiva, stability comes pathologically to him.

Hanuman subdues the negativity of Mars and Saturn:

Hanuman is associated with Mars and Saturn and known to eradicate the ill-effects of both. Mars’s qualities are reflected on him making him a warrior. That aside, he is the symbol of power, strength, courage, energy like Mars. Equally, Mars can be destructive in too begetting impulsivity, domination, control and self-centered ambitions. Worshipping Lord Hanuman purifies you of the said adversities of Mars. If a person is inflicted with Mars’s negative energy, worshipping Hanuman in Tuesdays after eating vegetarian food brings him good results in the long haul.

How reading Hanuman Chalisha is quintessential to curb negativity:

Hanuman Chalisha is the collection of 40 verses written to praise Lord Hanuman. It has a predetermined melody and tempo and takes 5-10 minutes to complete thus. One has to read the Hanuman chalisha to worship Lord Hanuman. You can also resort to it during a vandalized mental balance. There are a lot of recordings available across the internet. You can listen to them carefully to get the hang of reading Hanuman chalisha.